A Letter Full of Longing 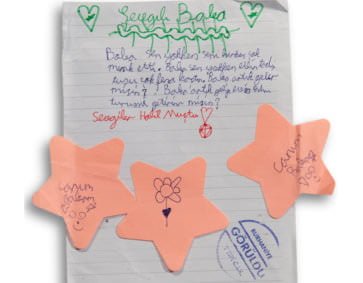 Brief Info on the Identity of the Person: A geography teacher who was teaching at a state school, who was then dismissed from his profession, tortured under custody.

He was dismissed from his profession on 22 July 2016 and was arrested on 24 july 2016. The torture started in the police car of KOM (   smuggling and organized crimes).

He was subjected to terrible torture for five days at KOM. Then he was hospitalized, put in an intense care unit, and he had an operation on his intestines, all of this happening without the family being notified..

His wife and children were not allowed to see him during his 21 day hospital stay. He was then sent to prison. During this time, his 13 year old daughter wrote this letter with tears, full of longing for his father.